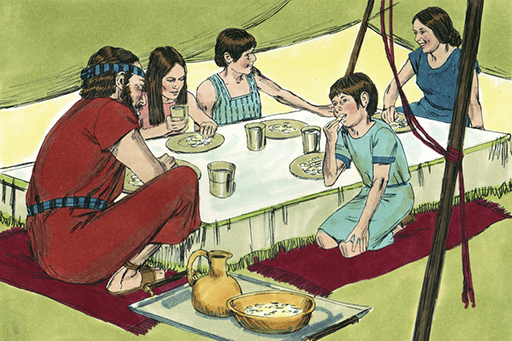 With the country of Egypt in ruin (not really though) the COI continued wandering aimleesly in the wilderness. Fourty five days into their journey, the people began to complain about their leadership.

And the whole congregation of the children of Israel murmured against Moses and Aaron in the wilderness:

And the children of Israel said unto them, Would to God we had died by the hand of the Lord in the land of Egypt, when we sat by the flesh pots, and when we did eat bread to the full; for ye have brought us forth into this wilderness, to kill this whole assembly with hunger.

Everyone is hungry and pretty pissed about the whole wandering around in the desert thing. The rest of the chapter is god telling Moses, then Moses repeating it to Aaron, then Aaron repeating it to the people, then the people doing it. This ain’t Hemmingway.

The deal is every morning there’s “manna” on the ground to eat, and in the evening quail will come around. Meat at night and “manna” in the morning. Each day you are to gather just enough to eat for that day, except the sixth day. The day before the Sabbath you must gather twice as much, because god doesn’t want you to work (i.e. pick up food on the ground) on the Sabbath. If you gather too much, it rots by the next morning, except on day six, when the magic keeps it fresh. There’s an interesting Wikipedia entry on manna here, it’s an interesting word/concept that may have a real counterpart.

And in the morning, then ye shall see the glory of the Lord; for that he heareth your murmurings against the Lord: and what are we, that ye murmur against us?

And Moses said, This shall be, when the Lord shall give you in the evening flesh to eat, and in the morning bread to the full; for that the Lord heareth your murmurings which ye murmur against him: and what are we? your murmurings are not against us, but against the Lord.

These verses make me laugh. The word is translated as murmurings, but could be grumbling as well. Essentially talking under their breath. God is saying, “I see you talking under your breath…I’ll show you.” Also, even though the word Lord is Yahweh, the verse ends with the plural, “us.” This is Moses claiming the “god” side very clearly. He speaks as if he and Aaron and Yahweh are a team against the people, more or less.

And it came to pass, that there went out some of the people on the seventh day for to gather, and they found none.

And the Lord said unto Moses, How long refuse ye to keep my commandments and my laws?

See, for that the Lord hath given you the sabbath, therefore he giveth you on the sixth day the bread of two days; abide ye every man in his place, let no man go out of his place on the seventh day.

So the people rested on the seventh day.

Then we have a little fit about leaving your tent on the Sabbath. This is an odd thing about this religion. The act of simply carrying something can beagainst the rules one day a week. Like most religions, there are variying degrees of adherence to ancient rules, but in some modern societies, special provisions are made for the rule, with barriers around communities so theat you can walk outside but still be “indoors.” There’s a quick overview here that deserves a read.

And Moses said, This is the thing which the Lord commandeth, Fill an omer of it to be kept for your generations; that they may see the bread wherewith I have fed you in the wilderness, when I brought you forth from the land of Egypt.

And Moses said unto Aaron, Take a pot, and put an omer full of manna therein, and lay it up before the Lord, to be kept for your generations.

As the Lord commanded Moses, so Aaron laid it up before the Testimony, to be kept.

They saved some of this manna as proof god is real! Let’s see it and prove the existence of god then. Oh, you don’t have it anymore? Okay. I can see how you could lose it. Where did you put it? “Before the Lord” and “before the Testimony”? That would mean the temple (that had not been built yet) next to the tablets containing the Ten Commandments (which hasn’t happened yet). Good talk.

This manna food continued for forty years. Oh yeah, and this story of them wandering in the middle of nowhere goes on for forty years. There’s many more “miracles” to be had on our journey to the promised land. Stay tuned.