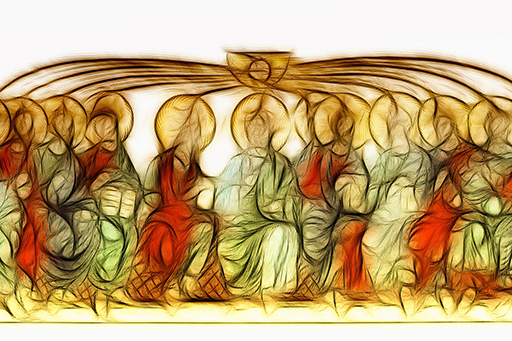 I have taken some time off, and have been trying to sort out the “names of god” in the Old Testament. Originally, there was no singular god in the Bible. There were many names and people who were translated as “god” rather than all there specific names. I’ll be going back and trying to edit in this information in past articles, and be more specific going forward. This reference page will be updated as well while going through the bible. Enjoy.

El – “god” This name is reserved for a primary god in a pantheon of gods. This was the name of the Canaanite god who was chief among their gods. This leads to “Elaha” in Aramaic, “Alaha” in Syriac, and finally “Allah” in Arabic. Generally considered a generic name for Yhvh.

Elohim – Plural form of the generic god. Although modern scholars are quick to point out that words ending in “-im” are plurals EXCEPT THIS ONE, the Bible says, “And Elohim said let us make man in our image.” This is also the term used in quotes like, “You shall have no other Elohim before me.” Despite various hoops jumped through by scholars, it is very clear that “in the beginning, there was polytheism.” This later would evolve into monotheistic belief in Yhvh, which would then turn back into polytheism with Jesus, the father, and the holy ghost before being reinterpreted as monotheistic with the trinity concept hundreds of years later.

El Shaddai – Although Shaddai’s meaning has been lost to history, this proper name is thought to reference Yhvh while clearly being influence buy the Canaanite god El.

Tzevaot or Sabaoth – Translated as the “Lord of Hosts,” and is used sparingly, but is thought to mean Yhvh.

Jah – An abbreviated form of Jehovah. Used in the Pslams and Isaiah for Poetic purposes. The word Hallelujah is actually two words. “Haleluya” (the modern Hebrew spelling) means praise and “Ya”, the first letter in Yhvh. English translators straighten in out a bit to it’s current form.

Yhvh – The actual name for the singular “god of Israel.” This was written without vowel signs, so pronunciation is not known. It is commonly pronounced Yahweh, or Jehovah. Often translated as “Lord God.” While Elohim created man in Genesis 1, Yhvh created man in Genesis 2, and was the one to breath life into him.

Generations of the Bible

One thought on “The Christian Pantheon”