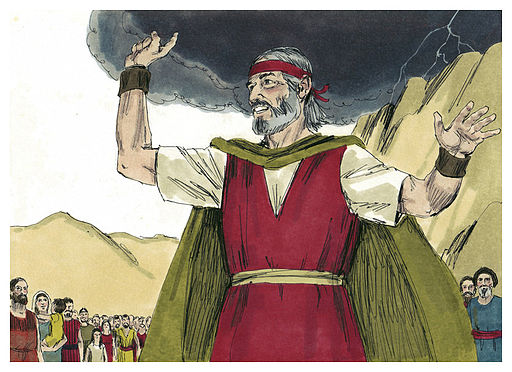 There are three sets of ten commandments, and they are different. There’s the original here, another in Exodus 34, and finally a set in Deuteronomy 5. Here’s a good quick overview. It’s a thing. You can read this set here, but I will break it down for you. Here’s the first set of commandments.

#1 No other gods before me

This verse is terrifying to many Christians. “Why would god tell us to put aside other gods if he is the only one?” These idiots have come up with bizarre interpretations of this to explain away the obvious polytheistic origins of their monotheistic religion. These “other gods,” are anything you value more than the church…I mean god. Here’s an example, but the basic thought is, if you spend four hours a week watching tv, but only two in church, praying, read the bible, etc. then tv is your god. You either need to watch less tv or do more “god stuff.”

The verses say not to make any graven image of anything, and then goes on to say not to worship them. Muslims believe (some of them, at least) that this means no statues of anything! There was even a prohibition on snowmen. Many Christians today just see that as no literal idols, but some stretch the meaning to “everything is an idol.” This commandment is almost exactly the same as the first one.

#3 Do not take the name of the Lord in vain.

This may be the dumbest one, and the one most poorly interpreted. Let’s start by remembering the time this was written. When resolving a crime or dispute, you would appear before some type of judge, and you would swear on god that you were telling the truth. There was also the belief that one could invoke the wrath of god. Literally, “Goddamn you” meant you wished god to harm that person, and should not be taken lightly. Today, most people feel this mean you shouldn’t use phrases like “goddamn” or “Jesus H Christ.” This ignores the fact that god’s name is Yahweh. It also implies that a Hindu, for example, could say goddamn it, since the god he would be referring to is completely different. Like everything, the extreme right has taken this farther. Some interpret this to warn against referring to yourself a Christian, but not acting good enough. Maybe even simply referring to god without being in the right mindset.

Now, the Bible is very clear on this. Absolutely no work is to be performed on the Sabbath. You, your slaves, your guests are all under this prohibition.  Let me repeat this, nothing is permitted, even using an electric wheelchair. This is why Chick-Fil-A is closed on Sundays. Which would be great, except the Sabbath is from sundown Friday night until sundown Saturday. In 321 CE, Constantine moved the single day of worship for all religions to Sunday, in honor of the Sun god. That’s right, Chick-Fil-A is committing a sin. Granted, this is one of those rules that has been watered down pretty good over the years.

#5 Honor thy father and mother

This is good and all, but does this constitute a commandment? Some say honoring parents make you grow up to be good citizens. What about terrible parents? This Catholic website admits there are limits. Sexual abuse is specifically mentioned as a deal breaker. That seems reasonable, after all, who knows more about sexually assaulting children than the Catholic Church?

#6 Thou shalt not kill

This seems easy, right? Don’t kill anyone. No murder, no wars, no capital punishment…wait, wait, wait. The bible will continue on to recommend genocide, war, capital punishment, and animal sacrifice over, and over, and over again. What gives? While some have gone as far as suggesting this verse leads to vegan diets, it has been argued this only means murder, i.e. bad killing. Surely god meant we can kill someone who breaks into our house. The crusaders of the Middle Ages would definitely not view killing in battle as an violation of this verse. What god was really talking about was abortion. Ignore the verses a few chapters away that have a much milder punishment for causing a miscarriage than killing the mother, or the passage in Numbers requiring abortions. (Numbers 5:11-31)

In Judaism, this is straight forward. There are other prohibitions on sex later on, but this deals with a man having sex with another man’s property (wife). This could cause a son being born and inheriting the wrong birthright; remember the story of Esau and Jacob? No one gave a shit about multiple wives, or sex slaves, or anything else clearly supported in the Old Testament. Christians came along and added as much as they can to it. Now, they claim it also means a woman having sex with a married man, two people unmarried having sex (that’s called “fornication,” by the way), one too many penises, sexual deviance, or even lustful thoughts. No, I’m not exaggerating.

#8 Thou Shalt Not Steal

Okay, this is pretty basic. This and no killing are the only two so far that are pretty much a win no matter what. It’s obvious even to a child. What does the Billy Graham Evangelistic Association say this means? Taking property (obviously), using deceptive business practices (yes), withholding wages (eat the rich, I’m onboard), kidnapping (wait, what), “wasting things that could be a blessing to others” (okay, now…), laziness (DON’T YOU COME FOR MY XBOX), rape (that doesn’t get its own thing?), and not tithing to the church (there it is).

#9 You shall not bear false witness against your neighbor

We have another winner! This is just a simple “don’t talk ill of your neighbor” rule. How can they screw this up? They can’t? I found one discussion that actually expanded this to include don’t judge people around you, you may not know everything. Don’t be a dick.

#10 Thou shalt not covet

This is easy, right? If you want something you don’t have, that’s greed and envy. Thinking about something is the same as doing it, so when you say, “I wish I had a pool like my neighbor,” you are actually stealing your neighbor’s pool! Well, turns out this verse is actually talking about taking things from someone when they are away from home. Wait, they passed on a rule against slavery, rape, or incest to make this a rule? This is technically the same as stealing!

There is the first ten commandments. We’ll end here, because all the other laws that follow deserve your undivided attention. Stay tuned!