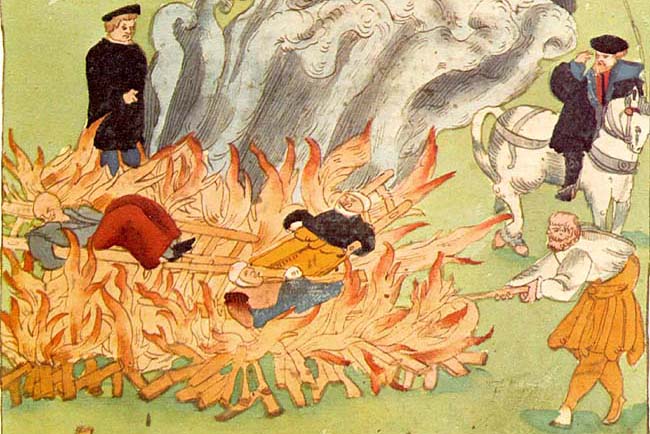 After the first ten commandments, god begins his long list of additional commandments. I won’t include the Bible quotes to read along, since this is all basically nonsense.

Moses is told not to make metal idols for Yahweh, but earth or stone altars; but, don’t use tools to work the stone, or you’ll pollute the stone. Here you can murder and burn animals to please god. Take a moment to consider the god worshipped by Christians, Jews, and Muslims demanded the death and incineration of animals to please him.

The chapter ends on an odd note.

Neither shalt thou go up by steps unto mine altar, that thy nakedness be not discovered thereon.

To put it bluntly, don’t build elevated altars because if you go up the steps and there’s someone under you, they can see your balls.

This is the basics. After six years you free your Hebrew slaves. If you “give him a wife,” then the wife and children are yours to keep. If he falls in love and wants to stay with his new wife and children, he can become a slave forever to stay with them. You have to pierce his ear first though.

Easy enough. The word “man” here is commonly used to mean “mankind.” That being said, later in the Old Testament, the perfect word of god clarifies this by rewording it to ensure punishment for killing a minor or woman. See the discussion here.

And if a man lie not in wait, but God deliver him into his hand; then I will appoint thee a place whither he shall flee. Exodus 21:13 (KJV)

This is generally thought to mean an accidental death of some kind, but it is interesting to note that “God” (Elohim) delivered the victim. The term Elohim is the plural for god, but often used to identify the judges in Israel later. This seems like a weird way of saying “accident.”

The rest of the old Testament is full of killing and forcing people into slavery. It is clear that this “stealing a man” and “killing’ excludes taking slaves or lives in acts of war.

If you hit someone but they can still walk with a cane, you must pay lost wages. Unless it is a slave, then as long as they do not die, you’re fine. The punishment for killing a slave is not defined. Some place between nothing and death. As a note, the actual quote in verse 21 says…

If men are fighting, and a pregnant woman is caused to give birth prematurely, the baby’s father can demand a payment from whoever hit the woman. If the baby is born injured, then it is an eye for an eye. Interesting note, this payment is based on the market value of the child, as all children and women were considered property. Read more here.

If you blind your slave, or knock out a tooth, then you must let the slave go free.

This is all the types of Ox related situations they could come up with. Ox kills someone, someone kills ox, ox kills through someone’s negligence, who gets the dead ox, etc. Before you ask, yes, there are times you stone the ox to death.

Thieves generally have to repay (with interest) that which they stole. If they are killed in the act, that’s cool too. This also explores accidentally destroying things. If you knock up a young girl, you also must marry her, or pay her father for the girl’s virginity, you know, because women are property.

Let’s look at the next commandment directly.

“Ye shall not afflict any widow, or fatherless child. If thou afflict them in any wise, and they cry at all unto me, I will surely hear their cry; And my wrath shall wax hot, and I will kill you with the sword; and your wives shall be widows, and your children fatherless.” – Exodus 22:22-24 (KJV)

Got that? This is one of the examples of true love and compassion in the Bible. Most of these punishments are carried out by humans, but this commandment is a direct threat from god himself. Also, one of the verses that Christians seem to ignore.

Don’t charge interest. Also, if you take something as collateral, you must let the guy continue to use the item as needed.

This verse is in two parts.

“Thou shalt not revile the gods…” This means “make light of” or “mock.” Again the word is Elohim which is most likely to mean the judges.

“…nor curse the ruler of thy people.” What does curse mean in the Bible? They believe in magic, so is it a literal, voodoo curse? Are they talking about mean tweets?

Either way, the next time your Uncle on Facebook talks shit about Nancy Pelosi or AOC, remind him he is committing a sin.

Okay, deep breath before we round out chapter 22.

Thou shalt not delay to offer the first of thy ripe fruits, and of thy liquors: the firstborn of thy sons shalt thou give unto me. Exodus 22:29 (KJV)

So “fruits” is used in the sense of “fruits of your labor,” so it can be interpreted broadly. “Liquors”, however, means “juice.” So, wine? Finally, we are told to give our first born to god…as a sacrifice.

“BUT THAT’S NOT WHAT IT MEANS. GOD WOULDN’T HAVE HUMAN SACRIFCE!”

Christianity is based on the single concept of god sacrificing his son. There’s also the whole Abraham thing with god asking him to kill his own son on an altar. While there is no direct archeological evidence that Judaism has ties with human sacrifice, it was practiced in the region, although it was not widespread.

Likewise shalt thou do with thine oxen, and with thy sheep: seven days it shall be with his dam; on the eighth day thou shalt give it me. Exodus 22:30 (KJV)

For whatever reason, animals where not to be sacrificed until at least eight days old.

And ye shall be holy men unto me: neither shall ye eat any flesh that is torn of beasts in the field; ye shall cast it to the dogs. Exodus 22:31 (KJV)

This is a complex one. Not only does this literally prohibit eating of animals found dead, it also says you can feed such meat to the dogs. There is discussion that dogs also mean gentiles. Meaning you can sell dead animals to gentiles. Lastly, the interpretation exists that this is what to do with a raped woman. You (the chosen ones) cannot “eat her flesh” (marry/have children with) because she is unclean after being defiled. You can sell her to a gentile, however.

So, that is just the first chapter of crazy rules following the ten commandments. We’ll get back on the crazy train next time!