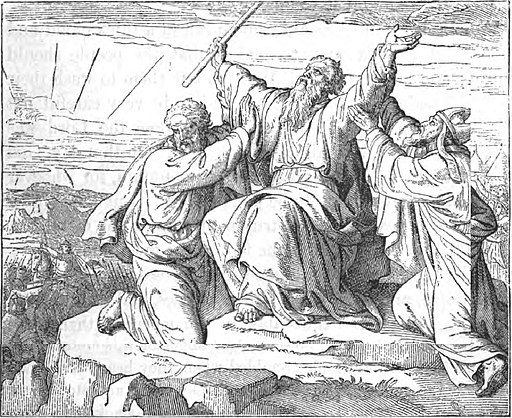 We rejoin the COI on their quest for the promised land. They move to Rephidim, which wasn’t a great idea, because there was no water there.

Wherefore the people did chide with Moses, and said, Give us water that we may drink. And Moses said unto them, Why chide ye with me? wherefore do ye tempt the Lord?

And the people thirsted there for water; and the people murmured against Moses, and said, Wherefore is this that thou hast brought us up out of Egypt, to kill us and our children and our cattle with thirst?

And Moses cried unto the Lord, saying, What shall I do unto this people? they be almost ready to stone me.

And the Lord said unto Moses, Go on before the people, and take with thee of the elders of Israel; and thy rod, wherewith thou smotest the river, take in thine hand, and go.

Behold, I will stand before thee there upon the rock in Horeb; and thou shalt smite the rock, and there shall come water out of it, that the people may drink. And Moses did so in the sight of the elders of Israel.

Once again, the COI go to Moses with a perfectly legitimate issue. THEY WERE DYING OF THIRST. Once again, Moses acts offended that they are complaining about certain death. Moe consults god, who tells him to go hit a rock with a stick and water will come out. Problem solved. One water point for five million people.

As quickly as that crisis was averted, we go to warfare

Then came Amalek, and fought with Israel in Rephidim.

And Moses said unto Joshua, Choose us out men, and go out, fight with Amalek: to morrow I will stand on the top of the hill with the rod of God in mine hand.

So Joshua did as Moses had said to him, and fought with Amalek: and Moses, Aaron, and Hur went up to the top of the hill.

And it came to pass, when Moses held up his hand, that Israel prevailed: and when he let down his hand, Amalek prevailed.

But Moses hands were heavy; and they took a stone, and put it under him, and he sat thereon; and Aaron and Hur stayed up his hands, the one on the one side, and the other on the other side; and his hands were steady until the going down of the sun.

And Joshua discomfited Amalek and his people with the edge of the sword.

Amalek is the perpetual enemy of Israel. Later in the Bible they make it clear that they are to be killed on sight. In Jewish tradition, the later wars in which the COI kill the cattle of the enemies are explained by pointing out Amalek sorcerers can take the form of cattle, so killing everything (men, women, children, and animals) was the only way to protect themselves from the evil ones. The “attack first and ask questions later” attitude has been brought into the modern culture, even though they admit the Amalekites no longer exist, but Israel’s enemies are sometimes referred to as Amaleks.

Moses uses his magic powers to allow a victory. His hands are held up by his companions, since they win the war when his hands are up, and they lose if his hands fall to his sides?? Why didn’t god just let them win? I mean, these are literally god’s chosen people, but he has some parlor trick to ensure their victory. How many of “god’s people” died as Moses struggled to keep his hands up? This isn’t even a test of Moses. Granted, “if you can hold your arms up all day, I will let your people live,” is still stupid, but at least it makes twisted sense.

And the Lord said unto Moses, Write this for a memorial in a book, and rehearse it in the ears of Joshua: for I will utterly put out the remembrance of Amalek from under heaven.

For he said, Because the Lord hath sworn that the Lord will have war with Amalek from generation to generation.

God says he will wipe out the memory of Amalek from under heaven. That’s why he made them write it down in a book? I mean, as far as I can tell, there’s no evidence that this nation actually existed, so the only reference to their existence is in scriptures that say god wiped out the memory of these people. What?

To summarize this chapter, Moses hits a rock and enough water comes out to support five million people. Then they engage in open warfare with another group, but only win because Moses props his hands up on rocks. Finally, god tells Moses, literally, to write down that the Amaleks will be forgotten. It is in the book.

How can we top this foolishness? Oh, just you wait.