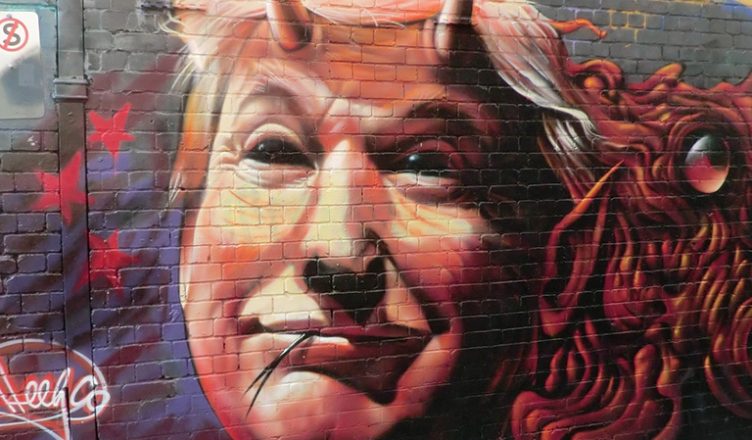 “When someone shows you who they are, believe them!” – Maya Angelou

Many people still worship the Great Orange One. Evangelicals explain away sins and his followers shout, “fake news” at anything pointing out his flaws. Yet, it is simple to build a case against Donald Trump with just a little research. Here’s reasons to oppose Trump, complete with sources.

Donald Trump lies so much, there is very few examples of him telling the truth. PolitiFact shows him telling the truth 31% of the time…and that is including “half-truths.” People that study liars are fascinated by him. At this point, the only people that believe him are the die-hard Republicans who are blind to the lies.

His fraud is much more interesting. Illegally using money from charities, defrauding investors, cheating contractors out of money promised, and his most famous fraudulent activity, Trump University. With over 3000 lawsuits filed against him, it is amazing that anyone could trust him.

He is a misogynist

To be blunt, he objectifies women. All women. Women to Trump are decorations; they are trophies to be won by the rich and powerful men like him. He cheated on every wife with the next one in line.  He’s been accused of at least sixteen cases of sexual assault. He agreed with Howard Stern that his daughter can be referred to as “a piece of ass,” he has admitted he is sexually attracted to his daughter, and he backed a child molester for Senate in Alabama. Most critically, he has ties to Jeffrey Weinstein, including being named as a rapist by one of Weinstein’s 13 yr. old victims. Weinstein had been accused of over one hundred counts of sexual assault, but somehow pleaded down to one count and spent very little time in prison.

Trump doesn’t trust science. It’s only natural, as I’m sure that he can’t imagine anyone being smarter than himself. He believes there’s a link between autism and vaccines, he thinks climate change is a fiction created by the Chinese. He was suspicious of the death of Supreme Court Justice Antonin Scalia, and hinted that Ted Cruz’s father played a part in the assassination of JFK. Trump believes Obama was born in Kenya, and that millions of immigrants voted illegally in the last election. He believes asbestos is safe and has retweeted videos posted by hate groups that have been proven false. The FBI, the CIA, and the Justice Department are all part of the deep state manipulating the people against him, in his eyes.

He is not very intelligent

A college professor at Wharton referred to him as “…the dumbest goddamn student I ever had.” Trump’s own Secretary of State referred to him as “a fucking moron.” The ghostwriter who helped him pen “The Art of the Deal,” said our President demonstrated “a stunning level of superficial knowledge and plain ignorance.” He speaks at a fourth-grade level. He thinks he knows more than the experts. (In the second grade, he punched his music teacher because he didn’t think he knew anything about music). He openly admits, that he loves the poorly educated.

Trump finally got his exam that proved he was in perfect health and has no cognitive issues. This exam was performed by Ronny Jackson, M.D., but the report was signed Dr. Ronnie Jackson. Trump did admit the test was very hard and not many people could pass it. Regardless of whether the report is a forgery or not, Trump is clearly showing all the signs of dementia. He uses a limited vocabulary, he has a short attention span, he angers easily, and he’s clearly paranoid. He drinks from glasses with both hands, which imply motor skill problems. Most famously, he recently slurred his speech during a public appearance.

As Jonathan Chait said, “Fine, Trump Doesn’t Have Dementia. He’s Just a Moron.” If he doesn’t have dementia, then how else can you explain his near illiteracy, his poor vocabulary, and his lack of complex reasoning skills? He may just be stupid.

A much bigger issue is America’s obsession with electing old men. As of this writing, there is a 91-year-old man on in the Senate. While it is possible for someone of advanced age to be mentally sharp and physically fit, the United States doesn’t require they have annual physical (or mental) exam. To the point, an USAF officer that works in a nuclear silo, and has one of two keys required to launch a nuclear missile, will have psychological exams to prove he can handle his assignment, and annual physical exams and evaluations. The President of the United States can authorize all the missiles to be launched, and he is not required any mental or physical oversight.

Trump’s companies have been fined for racist housing practices, racist hiring practices, and a history of racist comments about his employees. He has called blacks lazy, expressed his desire to have all Jewish accountants, has call Mexicans rapists, and tried to ban all Muslims from entering our country. He has said a federal judge, who happens to be of Mexican decent, should not be allowed rule on his Wall. While we are on the topic, he wants to build a wall between us and all those brown Mexicans, but not between us and those white Canadians. Recently, he has implied the United States wants people to immigrate form “the good” countries like Norway, but not “the shithole” countries like Nigeria. That seems pretty black and white, wouldn’t you say? He hesitates to condemn White Supremist and Nazi groups, while demeaning Black Lives Matter. Trump has used racial slurs at public events of Native Americans, and said all Haitians have aids. Clearly, he has a long history of showing his true colors.

The irony that the Republicans are the pro-military party, yet have constantly put our troops in harms way while aggressively cutting veterans programs is not lost on me. That being said, Trump’s distain for the military is shocking, even by GOP standards. He belittles POWs, insults gold star families, and told a grieving mother of a slain soldier, “he knew what he was getting into.” He “congratulates” troops for receiving a purple heart, an award, he admits, “I’ve always wanted one.” Homelessness among veterans has gone up for the first time in eight years. Trump froze federal hiring, which directly impacts veterans, as one third of federal employees are vets. This leaves 45,000 open positions in the Department of Veteran Affairs, the department responsible for providing care for our veterans.

Trump clearly doesn’t understand how the national debt works or the impact of tariffs. A Nobel winning economist has stated that the President couldn’t pass an Economics 101 course. His comments about GDP growth and what that means has been called “nonsense” by actual economists. He doesn’t seem to grasp how international trade works or the currency markets. Even Shiite Republican Ben Stein thinks Trump is not very smart on economics.

Donald Trump has a long list of high profile business failures. Trump airlines, Trump Vodka, Trump Mortgage, Trump Entertainment Resorts, Trump Steak, Trump Magazine, Trump University, and goTrump.com His restaurant, called (get ready for it), Trump Steakhouse was closed after fifty-one health violations were recorded. He has show a habit of entering into businesses he has no knowledge of, and assuming it will all work out. It never did, and it probably won’t.

Trump’s soft, forgiving attitude towards Nazis and white supremist have received condemnation worldwide, including calls to block him from entering into the United Kingdom. His attitude that “some of them” (Nazis) are good people is truly abhorrent. When white supremist killed a protester and injured several other by driving a car into a crowd, he blamed both sides, not just the side that committed murder. Even giving him the benefit of the doubt (he’s not pro-Nazi, he’s just stupid) his comments have been received as positive and empowering from white supremist, and Nazi groups.

His is a narcissist

He attacks people’s physical self instead of their ideas

Trump doesn’t come prepared to fight a battle of wits. When attacked, he simply assigns them a nickname and belittles their appearance. From mocking a disabled reporter’s disability to Elizabeth Warren’s cheekbones, he simply has no class. Remarkably, he has even attacked Supermodel Heidi Klum and Miss Universe Alicia Machado for being unattractive.

He has strong ties to U.S. and Russian organized crime, as well as Drug Cartels

When Trump bid to build a large project in Sydney, Australia, it was rejected because of his ties with the Mafia in New Jersey. Whether it is serving as a character witness for Mafia drug runners or hiring Russia mafia men, his ties to the dark side of society are well documented. In Panama, Trump looked the other way as Trump branded properties were used to launder money for drug cartels and Russian Mafia. Then there is the weird relationship between Deutsche Bank, Trump, and the Russia Mafia. Trump’s hands are dirty on all counts.

Look, this is just the low hanging fruit for the stupidest, most unpopular, and undoubtedly the worst President in U.S. history. Maybe I’ll continue to add to the list as time goes on. A word of warning though. It is tempting to try to use information to reason with a Trumpaholic. Don’t try. You cannot reason someone out of an emotional decision. Let’s face it, after eight years of a black man being in charge of the United States, the thought of a woman taking his place was too much for their fragile egos to bare. The Republicans could have run the Devil himself, assuming the Devil was white and had a penis. In many ways, they might have done just that.