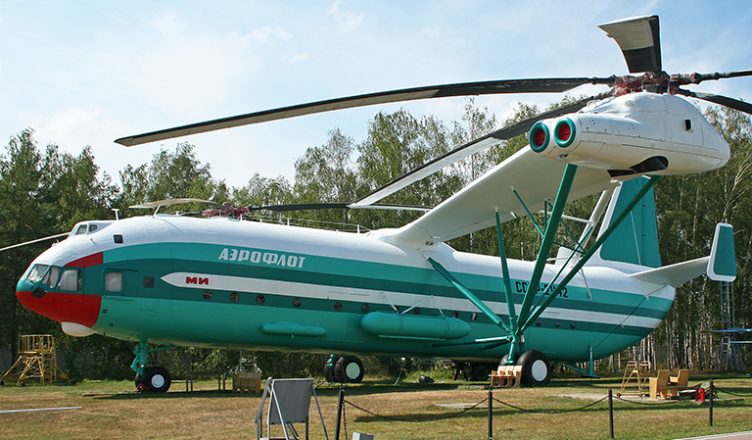 Many Texans will brag about things being bigger in Texas. These people have never been to the Soviet Union or viewed the Mil V-12.

At the beginning of the 1960’s, the Cold War was full swing. The Soviet’s needed a way to move their missiles around quickly and to places without runways. While no sane person would ever think “helicopter” for such a daunting task, the USSR was already known for making incredible strides in heavy lift rotary aircraft. While the West has the CH-53E, which can lift a payload of 36,000 pounds, the Soviets have the Mi-26 which lifts 44,000 pounds. The V-12 has lifted over 88,000 pounds. That was much more than it’s design requirement of 55,000 pounds!

This giant leap in capabilities was not easy. While conceived in 19661, it didn’t fly until 1967. The rotor blades counter rotated (moving forward over the fuselage) which helped it’s stability. The transmissions being linked to provide power in the result of engine failures and the heavy input loads required for flight controls were all technical issues that were overcome to place this beast in production. It quickly set several payload and payload to altitude records, most of which are still in place today. Unfortunately for the program, the needs of the USSR had changed in this time, and the requirement no longer stood. The development of the more conventional Mi-26 also removed several other options for a successful production run. Just two of these beautiful monsters were built, and just one survives.

Check out these links for more!

More Aviation History on My Site

Timeline of Mil helicopters from Helis.com