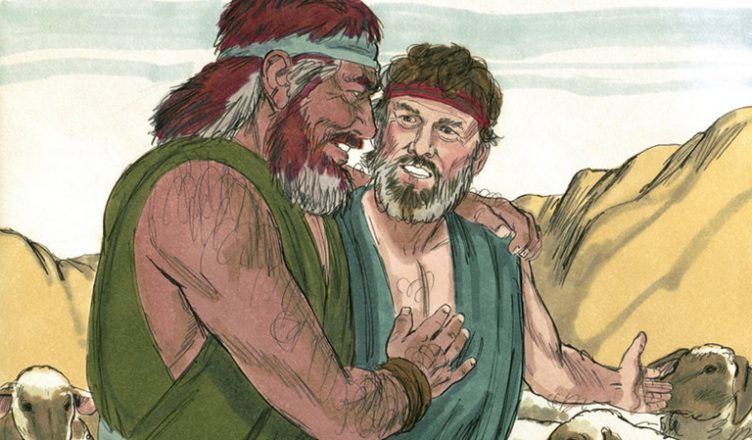 And I have oxen, and asses, flocks, and menservants, and womenservants: and I have sent to tell my lord, that I may find grace in thy sight. And the messengers returned to Jacob, saying, We came to thy brother Esau, and also he cometh to meet thee, and four hundred men with him. 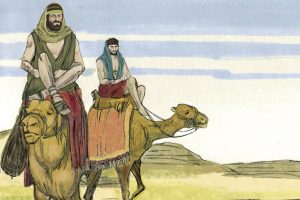 Jacob returns to reunite with his brother whom he cheated out of his inheritance and his father’s blessing using methods that would make Lucy and Ethel proud. He sends word ahead that he is super rich and implies he wants to share. His brother responds be coming after him with “four hundred men.”

First, Jacob divides up his caravan into two parts. That way, half of his crew can escape while the other half is slaughtered. Then, he prays to god to remind him that he is the good brother, and that he is supposed to have descendants as numerous as the sand, so please don’t let him and his entire family get wiped out tonight. His next plan is to begin sending collections of livestock (i.e. gifts) in waves in front of his group. The thought is, with each gift, his brother’s wrath will subside.

World Wide Wrestling at its finest 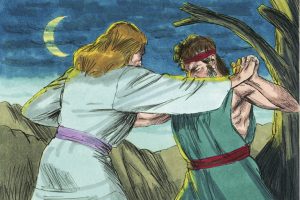 And he rose up that night, and took his two wives, and his two womenservants, and his eleven sons, and passed over the ford Jabbok. And he took them, and sent them over the brook, and sent over that he had. And Jacob was left alone; and there wrestled a man with him until the breaking of the day. And when he saw that he prevailed not against him, he touched the hollow of his thigh; and the hollow of Jacob’s thigh was out of joint, as he wrestled with him. And he said, Let me go, for the day breaketh. And he said, I will not let thee go, except thou bless me. And he said unto him, What is thy name? And he said, Jacob. And he said, Thy name shall be called no more Jacob, but Israel: for as a prince hast thou power with God and with men, and hast prevailed. And Jacob asked him, and said, Tell me, I pray thee, thy name. And he said, Wherefore is it that thou dost ask after my name? And he blessed him there. And Jacob called the name of the place Peniel: for I have seen God face to face, and my life is preserved.

Either that or, he sends his family away so he could spend all night “wrestling” with some guy he knew and “wrestled” so hard he hurt his leg. We’ve all been there.

At least this is now the origin of the name Israel, right?

Therefore, the children of Israel eat not of the sinew which shrank, which is upon the hollow of the thigh, unto this day: because he touched the hollow of Jacob’s thigh in the sinew that shrank.

And now you know why you can’t order “shrunken thigh sinew” and a Jewish Delicatessen.

And Jacob lifted up his eyes, and looked, and, behold, Esau came, and with him four hundred men. And he divided the children unto Leah, and unto Rachel, and unto the two handmaids. And he put the handmaids and their children foremost, and Leah and her children after, and Rachel and Joseph hindermost. And he passed over before them, and bowed himself to the ground seven times, until he came near to his brother.

Okay, THE GOOD GUY IN THE STORY is scared Esau will kill him on sight, so he puts his slaves and half-slave kids in front, then Leah and her kids next, the he kept Rachel (his favorite) and her kids with him. He literally built a human shield with women and children!

And Esau ran to meet him, and embraced him, and fell on his neck, and kissed him: and they wept.

Against all expectations, Esau ran to Jacob and embraced him and they cried tears of joy. In a rare moment in this book, a moment of pure forgiveness and mercy occurs. Introductions are in order, and Esau tries to give his brother back the gifts, but Jacob insists and Esau agrees. Then Esau ask him to travel home to Seir with him, but Jacob says his kids and cattle are slow, so Esau should go ahead of him and he’ll make it their eventually. Esau agrees and leaves. Then Jacob never goes to Seir but wanders around Canaan instead. Then he buys land from Hamor, to establish legal standing (remember, this book was actually written during a time when people who left the region during the Babylonian take over and those who stayed were arguing over who owned the land). 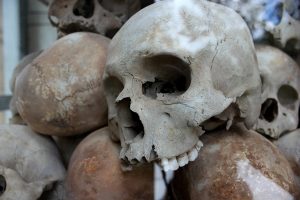 And Dinah the daughter of Leah, which she bare unto Jacob, went out to see the daughters of the land. And when Shechem the son of Hamor the Hivite, prince of the country, saw her, he took her, and lay with her, and defiled her. And his soul clave unto Dinah the daughter of Jacob, and he loved the damsel, and spake kindly unto the damsel. And Shechem spake unto his father Hamor, saying, Get me this damsel to wife.

The next chapter starts off with Hamor’s son having sex with Dinah. It would seem consensual, with Shechem falling in love. Hamor goes to Jacob to arrange a marriage, but there’s other emotions afoot.

To summarize, Hamor wanted his son to marry into Jacob’s family for political reasons, as well as his son’s love for Dinah. Jacob’s sons, however, were appalled that their sister was involved with someone who wasn’t a blood relative!

And the sons of Jacob came out of the field when they heard it: and the men were grieved, and they were very wroth, because he had wrought folly in Israel in lying with Jacob’s daughter: which thing ought not to be done. And the sons of Jacob answered Shechem and Hamor his father deceitfully, and said, because he had defiled Dinah their sister: And they said unto them, We cannot do this thing, to give our sister to one that is uncircumcised; for that were a reproach unto us: But in this will we consent unto you: If ye will be as we be, that every male of you be circumcised;

With that, everyone in Hamor’s city gets circumcised. Upon promise of free trade and brotherly love. The third day after every male in the city as circumcised (and still sore), Simon and Levi (two of Dinah’s brothers KILLED EVERY MALE IN THE CITY. Then they took all their possessions, including all their children and women. I am not really sure if simply the act of sex was the crime (remember, this is a society that freely forces slaves to have sex with them and has multiple wives) or if it was simple racism. Suffice it to say THE GOOD GUYS IN THE STORY commit genocide.

And Jacob said to Simeon and Levi, Ye have troubled me to make me to stink among the inhabitants of the land, among the Canaanites and the Perizzites: and I being few in number, they shall gather themselves together against me, and slay me; and I shall be destroyed, I and my house. And they said, Should he deal with our sister as with an harlot?

What was Jacob worried about? He has eleven boys, and two of them just slaughtered an entire city! Anyway, that’s the end of that story. Nothing ever comes of it and it’s never mentioned again. Just a nice slaughter of innocents by the good guys.

That wraps up today’s episode. The good guy Jacob is scared of his own shadow, his kids are genocidal maniacs, and his Esau is the one left to show “Christ-like” love and forgiveness, even though he’s technically the bad guy and his forgiveness is ignored and Jacob turns away from him.