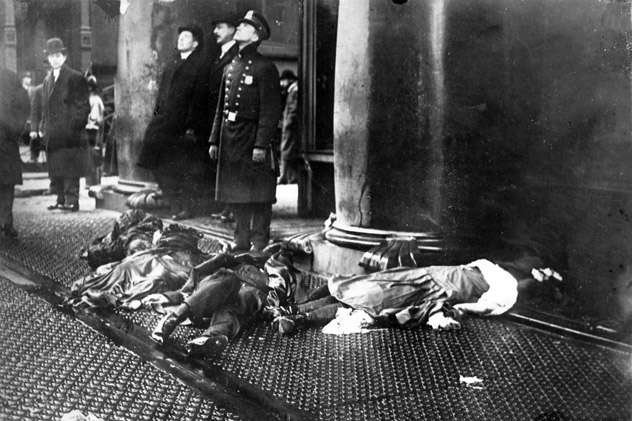 Anarchists and Libertarians tell us that market forces will drive us to a perfect world. Republicans tell us that regulations are hampering the economy. These groups view regulation as a burden to freedom. History tells us a different story.

In 1911, automatic fire sprinkler systems had been around for decades. Professional fire departments had established the benefits of fire drills and emergency exits. Against the advice of the fire department, the government did not make any of these mandatory.  Business saw these as unnecessary expenses.

In March, a fire broke out in the Triangle Shirtwaist Factory in New York City. All but one exit was locked, as was standard practice at the time to prevent employees from pilfering or slipping away for a break during the day. One hundred forty-six people died that day. Some died when a fire escape collapsed (there were no minimum standards) while many died trapped inside. A majority of the victims jumped to their death to avoid incineration while horrified onlookers watched.

One hundred forty-six people died as the result of unregulated free market capitalism. This event is the beginning of the New Deal. The politicians began to enact regulations to protect the working class as a survival tactic. Over the next few decades, more and more regulations were put in place to curb the excesses of corporations. Shorter workweeks, fire protections, and safety regulations. New York become a progressive city, enacting many rules that would soon be mimicked by FDR; social safety nets, minimum wages, and others.

It is clear that unregulated business leads to ruin. Over and over again, this has played out in world history. One cannot argue that governments and mankind have always been innocent. It was obvious to our founders that business, government, and citizens must all work together, and watch each other closely, to create a great nation. When someone tells you how regulations are holding us back, show them the bodies on the street. Our history is there for everyone to learn from.

The owners of the factory, Max Blanck and Isaac Harris, were acquitted on manslaughter charges. The building was well insured, and the duo made money from the destroyed factory. This was the fifth factory they owned which had burned.

Cornell University’s archives on the fire

History Channel’s reporting of the fire

OSHA’s take on the fire