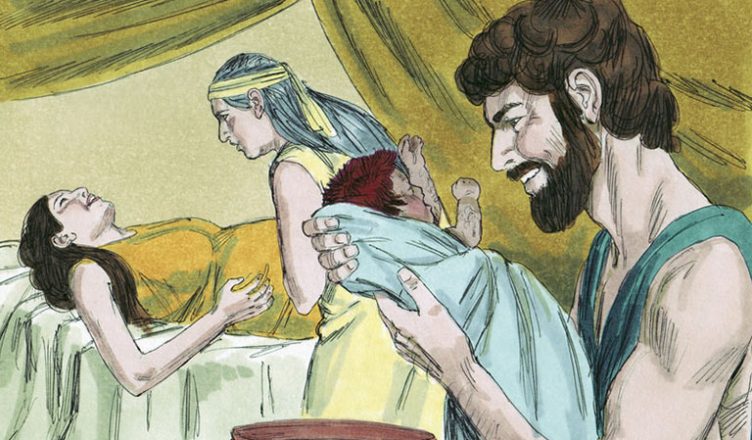 After the death of Abraham, the Bible reminds us of Ishmael, and tells us he had twelve princes for sons, and died at the age of 137. His decendants are said to have “lived in hostility toward all the tribes related to them.” The we get on to Abraham’s son, Issac.

We learn that Isaac married at the age of forty and his wife Rebekah, like is mom, was also barren. After twenty years of no kids, he prayed and suddenly she’s pregnant with twins (I guess Isaac was better at praying than his dad). Rebekah knew something was amiss and asked the Lord what’s up.

And the Lord said unto her, Two nations are in thy womb, and two manner of people shall be separated from thy bowels; and the one people shall be stronger than the other people; and the elder shall serve the younger. And the first came out red, all over like an hairy garment; and they called his name Esau. 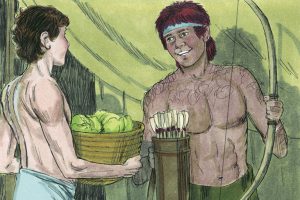 Rebekah has twin boys. The oldest is Esau and the other Jacob. Esau probably means “hairy.” As you have seen, they weren’t very imaginative with names. Esau was daddy’s favorite. He loved to hunt and bring home wild game. Jacob was a momma’s boy and like to hang out at home. Then this happened…

And Jacob sod pottage: and Esau came from the field, and he was faint: And Esau said to Jacob, Feed me, I pray thee, with that same red pottage; for I am faint: therefore was his name called Edom. And Jacob said, Sell me this day thy birthright. And Esau said, Behold, I am at the point to die: and what profit shall this birthright do to me? And Jacob said, Swear to me this day; and he sware unto him: and he sold his birthright unto Jacob. Then Jacob gave Esau bread and pottage of lentiles; and he did eat and drink, and rose up, and went his way: thus Esau despised his birthright.

So, let’s get this straight. Edom means “red” and the Bible says the red headed Esau got the nickname “red” because he liked red soup. He does this weird thing where he swears off his birthright for a bowl of soup because he believed he was literally dying from hunger. Can we now just drop the grief given to millennials for being “snowflakes?”

The Apple Doesn’t Fall Far From The Tree

Chapter 26 starts off saying there’s a famine in the land. It stops to clarify that this is a different famine than mentioned ONE HUNDRED YEARS AGO when Abram went to Egypt. Isaac went to Gerar and the Lord told him to stay there and not go to Egypt. This was the land he had been promised (that he would never take over, by the way). He stayed in Gerar whose king was Abimelech. This is the same king that Abraham mislead, telling him that Sarah was his sister, not his wife. Well, guess what.

The Bible goes on to say Abimelech saw Isaac “sporting” with Rebekah. He flips out and says, “not again.” He threatens to kill anyone who lays a hand on them. For his deception, the Bible says Issac planted crops that returned a hundred fold…during a famine.

And the man waxed great, and went forward, and grew until he became very great:

He became rich and famous, which is weird because he inherited everything from Abraham and was already rich and famous. It says the Philistines envied him and filled in all their wells.  The king tells them to move away, becuase he is too powerful. So he moves away. Wait, what? God tells him to live there, the king admits he is far more powerful than him, and Issac moves away? The next eight verses are about digging wells. They restore all the wells Abraham dug, then dig some more! The Philistines keep taking the wells until finally they have enough, and the spot of the last well is where our hero settles down. Or does he.

And he removed from thence, and digged another well; and for that they strove not: and he called the name of it Rehoboth; and he said, For now the Lord hath made room for us, and we shall be fruitful in the land. And he went up from thence to Beersheba. And the Lord appeared unto him the same night, and said, I am the God of Abraham thy father: fear not, for I am with thee, and will bless thee, and multiply thy seed for my servant Abraham’s sake. And he builded an altar there, and called upon the name of the Lord, and pitched his tent there: and there Isaac’s servants digged a well. And it came to pass the same day, that Isaac’s servants came, and told him concerning the well which they had digged, and said unto him, We have found water. And he called it Shebah: therefore the name of the city is Beersheba unto this day.

He says, “finally there’s room for us,” then immediately moves again. Then god speaks to him, he builds and alter, then digs a new well. He claims the well is called Sheba, and that’s why the town is called Beersheba. That’s right, the town that has been referred to in this story as Beersheba for a couple of hundred years now is called Beersheba by Isaac.

Esau takes two Hittite wives, which upset mom and dad. What! His cousin or sister isn’t good enough for him? So then begins a long, rambling story. The text is terrible so I won’t repeat it here, but this is a link if you are so inclined. The story goes that Isaac is blind from age and asks that his favorite son Esau goes and gets a wild beast and prepares his favorite meal so he can bestow his blessing on Esau. Rebekah overhears this and they launch a plan. First, Rebekah will prepare goat like she prepares the wild game. Second, Jacob will wear his brother clothing. Finally, the dead goats skin will be cut up and placed around Jacob’s neck and hands, so he will feel like Esau to the touch. (Exactly how hairy was Esau?!) The plan works like a champ, and Jacob lies his way to a blessing. 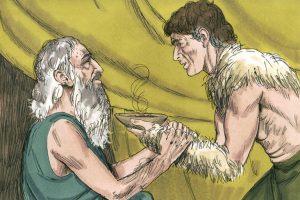 Esau shows up, and him and his father figure out what happened. Poor Esau is begging his father to also bless him, but Isaac said he used up most of his magic blessing Jacob, so he gives him this blessing. 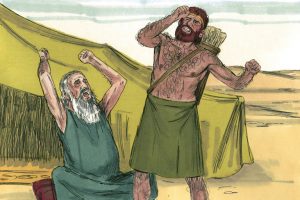 And Isaac his father answered and said unto him, Behold, thy dwelling shall be the fatness of the earth, and of the dew of heaven from above; And by thy sword shalt thou live, and shalt serve thy brother; and it shall come to pass when thou shalt have the dominion, that thou shalt break his yoke from off thy neck. And Esau hated Jacob because of the blessing wherewith his father blessed him: and Esau said in his heart, The days of mourning for my father are at hand; then will I slay my brother Jacob.

Rebekah now realizes that Esau will simply kill Jacob, and Jacob (being a momma’s boy) can’t stop it. She tells him to flee to her brother’s house until all this blows over and Esau FORGETS WHAT HAPPENED.

And tarry with him a few days, until thy brother’s fury turn away; Until thy brother’s anger turn away from thee, and he forget that which thou hast done to him: then I will send, and fetch thee from thence: why should I be deprived also of you both in one day?

Next time, we’ll follow Jacob on his way to find a wife and hide from his brother. Stay tuned!