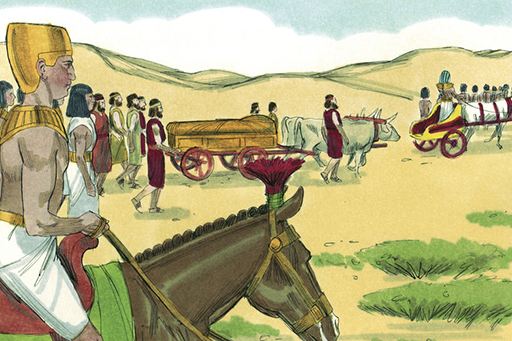 And Jacob said unto Joseph, God Almighty appeared unto me at Luz in the land of Canaan, and blessed me,

And said unto me, Behold, I will make thee fruitful, and multiply thee, and I will make of thee a multitude of people; and will give this land to thy seed after thee for an everlasting possession.

And now thy two sons, Ephraim and Manasseh, which were born unto thee in the land of Egypt before I came unto thee into Egypt, are mine; as Reuben and Simeon, they shall be mine.

And thy issue, which thou begettest after them, shall be thine, and shall be called after the name of their brethren in their inheritance.

And as for me, when I came from Padan, Rachel died by me in the land of Canaan in the way, when yet there was but a little way to come unto Ephrath: and I buried her there in the way of Ephrath; the same is Bethlehem.

And Israel beheld Joseph’s sons, and said, Who are these?

Yeah…Joe takes his two oldest kids to visit their dying grampa. Jacob brags that God gave him Canaan and blessed him. (Then his kids committed genocide, his oldest slept with one of his wives, his favorite son was sold into slavery, and a massive famine engulfed the land. #Blessed) Then he told Joseph that he was taking possession of his two children. He could keep all the other ones, but the two oldest are his…now who are these two guys with you? Once he understands those are the sons he just claimed, he blessed them…but he did it wrong.

And he blessed them that day, saying, In thee shall Israel bless, saying, God make thee as Ephraim and as Manasseh: and he set Ephraim before Manasseh.

And Israel said unto Joseph, Behold, I die: but God shall be with you, and bring you again unto the land of your fathers.

Moreover I have given to thee one portion above thy brethren, which I took out of the hand of the Amorite with my sword and with my bow.

Israel casts the magic spell, forever blessing the younger son. He also tells Joe that he is the blessed one among his brothers, and that God will bring him home someday. He will give him the land he stole…I mean liberated…from the Amorites. Finally, Jacob gives out the big Breakfast Club close for the book. He lists his kids and what will become of them.

Unstable as water, thou shalt not excel; because thou wentest up to thy father’s bed; then defiledst thou it: he went up to my couch.

So Reuben lost his “firstborn” status because he banged his stepmom. He will never amount to anything. To review, he is the son who Convinced his brothers not to kill Joseph, and seemed to actually be a good guy. Other sources claim the “bedding” incident was actually a reference to, after the death of Rachael, there was a power struggle between the remaining wives about who gets “favorite” status. Jacob went with the hottest one, presumably, but his son forced the issue, siding with the wife who was legally next in line, which angered dad. We’ll never know.

Simeon and Levi are brethren; instruments of cruelty are in their habitations.

O my soul, come not thou into their secret; unto their assembly, mine honour, be not thou united: for in their anger they slew a man, and in their selfwill they digged down a wall.

Cursed be their anger, for it was fierce; and their wrath, for it was cruel: I will divide them in Jacob, and scatter them in Israel.

He comes down hard on these two assholes. They are the ones that committed genocide after their sister had sex with a local. Not that Jacob minded the killing, he just didn’t want the headaches that would follow. It was also Simon that wanted to kill Joseph, and was upset when he was sold instead. This is why he was taken as hostage in Egypt, as some sources claim Joseph was worried that these two brothers, together, could take over Egypt. I know, that’s stupid, but this book isn’t very well grounded in reality.

Oddly enough, even though Levi was scolded by dad, he descendants became the priestly tribe, and in a few generations he would produce Moses.

Judah, thou art he whom thy brethren shall praise: thy hand shall be in the neck of thine enemies; thy father’s children shall bow down before thee.

Judah is a lion’s whelp: from the prey, my son, thou art gone up: he stooped down, he couched as a lion, and as an old lion; who shall rouse him up?

The sceptre shall not depart from Judah, nor a lawgiver from between his feet, until Shiloh come; and unto him shall the gathering of the people be.

Binding his foal unto the vine, and his ass’s colt unto the choice vine; he washed his garments in wine, and his clothes in the blood of grapes:

His eyes shall be red with wine, and his teeth white with milk.

Judah is the one who will rule them all…I guess Joe isn’t the favorite after all? He is compared to a mighty lion! The scepter is a mark of royalty, saying his descendants will rule over all until…Shiloh comes? Many believe that means Jesus or the Jewish messiah. Either way, Judah was not a kingdom yet, and would only exist from about 900 BCE until about 600 BCE, so there’s that. Then it says his eyes will be as red as wine? So, he’ll be a drunk? AT least he has nice teeth.

Zebulun shall dwell at the haven of the sea; and he shall be for an haven of ships; and his border shall be unto Zidon.

Issachar is a strong ass couching down between two burdens:

And he saw that rest was good, and the land that it was pleasant; and bowed his shoulder to bear, and became a servant unto tribute.

Yeah, nobody gives a shit about these two.

Dan shall judge his people, as one of the tribes of Israel.

Dan shall be a serpent by the way, an adder in the path, that biteth the horse heels, so that his rider shall fall backward.

The tribe of Dan will be the Judges! They also are alluded to as a serpent. Now, some scholars say this is a reference to Belial, the vague character that later becomes “the devil.” Some even go as far as to say Dan will produce the anti-Christ. Let’s not forget that serpents are symbols of wisdom (“Be ye wise as serpents,” Jesus) and they are supposed to be Judges. Just sayin’.

Out of Asher his bread shall be fat, and he shall yield royal dainties.

Naphtali is a hind let loose: he giveth goodly words.

Yeah, nobody cares about these guys either.

The archers have sorely grieved him, and shot at him, and hated him:

But his bow abode in strength, and the arms of his hands were made strong by the hands of the mighty God of Jacob; (from thence is the shepherd, the stone of Israel:)

The blessings of thy father have prevailed above the blessings of my progenitors unto the utmost bound of the everlasting hills: they shall be on the head of Joseph, and on the crown of the head of him that was separate from his brethren.

Benjamin shall ravin as a wolf: in the morning he shall devour the prey, and at night he shall divide the spoil.

Alright, Big Ben is a bit of a heavy. Some sources say this alludes to his descendants being great warriors, like King Saul. Others point to this tribe controlling the region with the temple in it, and the temple itself is the wolf, devouring sacrifices.

Before he dies, he makes Joseph promise to bury him in Canaan. Then he drops that Abraham bought the land to bury people on. This is important. If you remember in the story of Abraham, this purchase was proof that the land belonged to them, while the Jew who went in Exile later claimed Moses had a claim due to God telling them to take the country by force. Either way, God promised them the land, but they never really took possession of it. Either way, he died.

Now we come to the end of Genesis, chapter 50. It says that Joseph embalmed his father, which took forty days (!?) and the Egyptians (who regarded shepherds as second class citizens) mourned seventy days. The the Pharaoh sent all of his court, officials, and dignitaries with Joseph to bury his father. Then they took all the adults in Goshen, leaving the children alone. Once on site, they spent seven days in mourning before leaving.

Upon their return, all the brothers were all, “Ummm, sorry about the trying to kill you and then selling you into slavery thing…please don’t kill us.” The Joe takes the high road.

And Joseph said unto them, Fear not: for am I in the place of God?

But as for you, ye thought evil against me; but God meant it unto good, to bring to pass, as it is this day, to save much people alive.

Now therefore fear ye not: I will nourish you, and your little ones. And he comforted them, and spake kindly unto them.

See, it was God’s will that this happens. How else was Pharaoh going to enslave the entire region through famine and Joseph’s skill? Then when Joe was ready to die, he said this…

And Joseph said unto his brethren, I die: and God will surely visit you, and bring you out of this land unto the land which he sware to Abraham, to Isaac, and to Jacob.

And Joseph took an oath of the children of Israel, saying, God will surely visit you, and ye shall carry up my bones from hence.

So Joseph died, being an hundred and ten years old: and they embalmed him, and he was put in a coffin in Egypt.

Joseph says don’t worry, someday God will rescue you out of the slavery he lead you into through the whole “perfect plan” that was executed. Annnnd he’s dead; thus ends the book of Genesis. We went from creation (approx 4004 BCE to the death of Joseph (approx 1445 BCE), which is about 2500-2600 years. We’ve seen the creation, the lives of Adam, Noah, Abraham, and Joseph. We’ve seen Yahweh condemn all of mankind for the sins of Adam and Eve, Yahweh letting the first murderer off with a stern warning, then killing nearly everyone because they were so evil. We’ve seen the heroes of the Bible have sex with their half-sisters, cousins, and slaves. We’ve seen fathers attempt human sacrifices of their sons, fathers abandoning their children in the wilderness, and brothers selling their siblings into slavery. And these were just the good guys, and this is just book number one of sixty-six books. Can I say it gets better? It gets better. Stay tuned for more murder and mayhem.