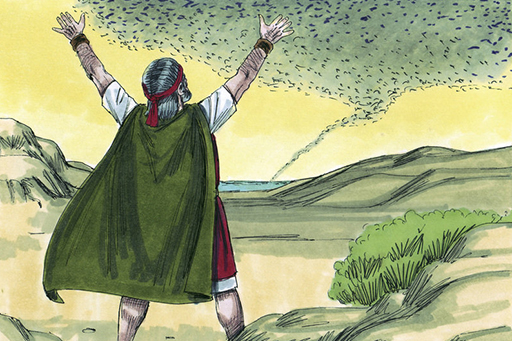 If you’ve been reading the text along with our articles, you’ll know by now that a very simple story can be stretched out into pages upon pages in the Bible. As we enter into the well-known story of the ten plagues of Egypt, it is a good thing to remember that it takes seven chapters. Seven! Keep that in mind if I seem to race through sections with little quoting.

The plan begins by Aaron and Moses telling Pharaoh to let the Hebrews go into the desert and have a party for god. Pharaoh tells him, “I don’t know your god,” and proceeds to tell him to get back to work. Aaron says it will only take a few days, so let them go and they’ll come right back. WHICH IS A LIE, BY THE WAY. In response, the Pharaoh orders that the Israelis will no longer be given straw to make bricks, but will have to gather it on their own. Also, their brick quota doesn’t change. Obviously, they fall behind and get beaten for it, so Moses cries out to god.

And Moses returned unto the Lord, and said, Lord, wherefore hast thou so evil entreated this people? why is it that thou hast sent me?

For since I came to Pharaoh to speak in thy name, he hath done evil to this people; neither hast thou delivered thy people at all.

That took an entire chapter.

The next chapter starts out with god telling Moses how awesome he is, and just you wait and see what he has in store. They need to go back to Pharaoh and repeat the request. Then we have a string of “begets.” One that stands out is this one.

And Amram took him Jochebed his father’s sister to wife; and she bare him Aaron and Moses: and the years of the life of Amram were an hundred and thirty and seven years.

For those of you playing Old Testament bingo at home, please mark the “incest” box. Moses’ mom was also his aunt.

The chapter ends with god reiterating that Moses and Aaron should indeed, repeat the request to Pharaoh.

That took an entire chapter.

The next chapter starts by…repeating the command to return to Pharaoh. This time, there’s a little insight into the end game god has planned.

And I will harden Pharaoh’s heart, and multiply my signs and my wonders in the land of Egypt.

That’s right. God admits he will cause Pharaoh to deny Moses’ request so god can perform his “signs and wonders.” Let’s be clear here, he is talking about causing great harm to a country full of people, to include murdering countless children. Now, it’s show time.

As a warm up to the ten plagues of Egypt, they have the exchange where Aaron casts down his rod, and it becomes a serpent. Pharaoh’s men do the same thing, but god’s snakes eat those Egyptian snakes. But, as advertised, god hardens the Pharaoh’s heart.

What’s up with the serpents? Modern Christians are taught serpents are evil and a symbol of Satan; yet, time and time again, serpents are good in the Bible. Remember, the serpent in the Garden of Eden was not identified as Satan originally. God’s first miracle in Egypt was turning a staff into a serpent. Later we will see serpents as symbols of hope and wisdom and healing…something to ponder.

God turns the waters (river, pools, streams, etc.) to blood and all the fish die. Interestingly, the Egyptian mages do it too, the Bible says. I’m not sur what that means, since all the water was turned to blood already. Anyway, it says the people dig wells near the river, and that water is fine, so Pharaoh’s heart hardened.

God makes a bunch of frogs, which the Egyptian mages do also. Again, it is not clear why or to whom the Egyptians perform this feat, but regardless Pharaoh says he will let them go if they do something about the frogs. So, god kills all the frogs, which now litter the country while rotting and smelling. It is written they had to pile them up all over the countryside. Pharaoh then says he changed his mind.

God turns the dust into lice, which is the first one the Egyptian’s cannot duplicate. The Mages tell Pharaoh that this is the work of god (which wasn’t in dispute. Again, it wasn’t that the Pharaoh didn’t believe Yahweh existed, it was that it wasn’t his god). Anyway, his heart remained hardened.

Next comes the flies, which drives everyone nuts. Interesting side note, this is the first plague that doesn’t affect the Jews living in Goshen. This implies the other plagues did. Regardless, Pharaoh really hates flies, so he relents and says he’ll let them have their party IN GOSHEN if they do away with the flies. Moses tells him they have to leave for three days, since they will sacrifice animals in a manner which is profane in Egypt. This is not clear exactly what he meant. Egyptians also sacrificed animals, but had different rules and criteria. It is likely they just murdered then animals the wrong way. Pharaoh relents and says, sure, go into the wilderness, just don’t go far. So, god removes the flies, and Pharaoh is all like, “you fell for that again!”

Next, god kills all of the livestock of the Egyptians, but spares the Israel livestock, including horses and camels. Remember that for later. Pharaoh was vegan, I guess, and he didn’t care.

Next comes boils, which seem to be painful lesions. It doesn’t say the Israel’s where protected from this one, but maybe an oversight? Pharaoh really hated this one, because it is written that god had to harden Pharaoh’s heart. In other words, he was ready to let them go, but Yahweh forced the matter to continue the suffering.

Next comes lightning and hail! They are given a warning, so the Egyptians can go inside with their cattle and be spared before the storm starts. Wait. Didn’t ALL of the Egyptian cattle die at the beginning of the chapter? Nothing to see here. The storm is so violent that the crops are all destroyed and anyone outside is killed, except in Goshen, which is protected. Pharaoh relents again, and Moses says he’ll stop it once he leaves the city, but he knows Pharaoh is a liar. Sure enough, the rain and hail stop and Pharaoh changes his mind.

And the Lord said unto Moses, Go in unto Pharaoh: for I have hardened his heart, and the heart of his servants, that I might shew these my signs before him:

We see here that god is admitting that Pharaoh is only keeping them because god wills it. He literally wants to show off more.

After this admission, we see Moses threaten locust, which will eat the remaining food supply for the country. The Egyptians in the court beg Pharaoh to let them go, and admit Egypt is finished as a nation state. Pharaoh asks them who will go on his trip to the desert, and he replies, everyone, all of our possessions and cattle. Pharaoh is all, like, “now who’s a liar. You are going to leave and never come back. No.”

Then the locust come and do the damage as advertised. He quickly calls them c=back and admits he is a sinner and begs them to take away the locust. They do, and god again HARDENS HIS HEART and the people remain captive.

For three days there was total darkness, except for Goshen. Interestingly, it implies that even things like candles didn’t work. Pharaoh then says everyone can leave, but they can’t take the cattle. Moses says no deal, and Pharaoh’s heart is supernaturally hardened again by god. Pharaoh then says he will kill Moses if he ever sees him again. Moses then tells him he will never see him again.

The Lord kills the first born of everyone, including animals, unless they are marked. This story will get an entire article next time, but for now just remember the mass killing of the innocents. Pharaoh finally relents and lets the captives go.

What happened here? The Jews were so populous and feared that they were essentially tortured by the Egyptians to keep them in check. God killed all the animals…more than once, apparently, all the fish, and all the crops. This would have totally destroyed Egypt as a nation, and they would have literally starved. Obviously, this never occurred, which is proof enough to doubt anything in the Old Testament. What is telling is that Yahweh is the one that kept Pharaoh from letting the people leave, it was Yahweh that lead them into captivity, and it was Yahweh that demanded a blood sacrifice to keep from killing the first born of his own chosen people. Remember this when Christians says God is Love.

Next time, we explore the bizarre demands of Passover before we continue with the story of Moses.