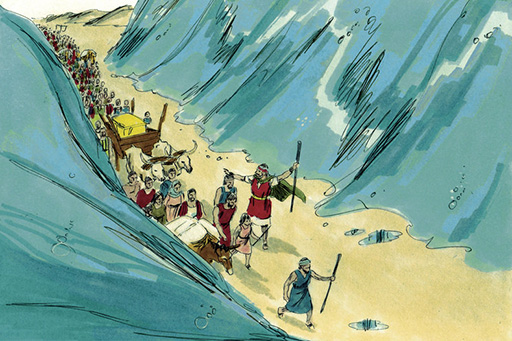 Chapter 13 wraps up by saying god was worried that, if he took his people straight to the promised land, the war they would fight would cause them to want to return to Egypt. He never told them the “promised land” was already inhabited by other people, and that god’s gift would only come after his chosen people committed horrific acts of genocide against the people living there. He had them literally start off by going in the wrong direction. Moses also brought Joseph’s bones, to bury in the promised land. It highlighted that god himself lead the people by a pillar of cloud in the day, and a pillar of fire at night.

And the Lord spake unto Moses, saying,

Speak unto the children of Israel, that they turn and encamp before Pihahiroth, between Migdol and the sea, over against Baalzephon: before it shall ye encamp by the sea.

For Pharaoh will say of the children of Israel, They are entangled in the land, the wilderness hath shut them in.

And I will harden Pharaoh’s heart, that he shall follow after them; and I will be honoured upon Pharaoh, and upon all his host; that the Egyptians may know that I am the Lord. And they did so.

And it was told the king of Egypt that the people fled: and the heart of Pharaoh and of his servants was turned against the people, and they said, Why have we done this, that we have let Israel go from serving us?

And he made ready his chariot, and took his people with him:

And he took six hundred chosen chariots, and all the chariots of Egypt, and captains over every one of them.

Yahweh tells Moses that the Egyptians think you are lost (since I am dragging you all over the desert in every way but the direction you supposed to go) and he (god) will harden his heart again to make him come after you with his army. Also, we told him we were going to come right back, but he has realized that was an obvious lie. Pharaoh is on his way with six hundred chosen chariots, and also all the chariots. See the following picture of a chariot and see if you see an issue.

Hmmm, a horse. Didn’t god already kill all the horses in Egypt a couple of chapters ago?

The Army Closes In

The children of Israel (COI for short) see the army coming, and start complaining to Moe that they are going to die. Now, as a child, this always puzzled me. They had JUST WITNESSED THE TEN PLAGUES OF EGYPT and they are still doubting the entire book of Exodus. Weird, huh. Moses turns to god for help.

And Moses said unto the people, Fear ye not, stand still, and see the salvation of the Lord, which he will shew to you to day: for the Egyptians whom ye have seen to day, ye shall see them again no more for ever.

The Lord shall fight for you, and ye shall hold your peace.

And the Lord said unto Moses, Wherefore criest thou unto me? speak unto the children of Israel, that they go forward:

But lift thou up thy rod, and stretch out thine hand over the sea, and divide it: and the children of Israel shall go on dry ground through the midst of the sea.

Is it just me or was god kind of an ass? They have an army bearing down on them, they are in the middle of nowhere with their back to the sea, and Yahweh is like, “Are you going to ask me for everything! Just part the sea, duh.” In a big cgi worthy scene, Charleston…I mean, Moses parts the Red Sea so the COI can walk across the seabed. The pillar of cloud goes to the Egyptians and holds them off while the escape is made.

The Parting of the Red Sea

The rest of the chapter is what you remember from Sunday School. The Egyptians pursue the COI into the sea, but god floods the open channel and kills everyone. The one exception from Sunday School is the name of the sea. It is nearly universally accepted now that “Red Sea” was mistranslated from “Reed Sea.” The Reed Sea was a swampy area that could be crossed on foot at low tides.

To summarize the events thus far. All the food supply in Egypt was destroyed, all the god and silver were taken by the COI, and the entire army (including the Pharaoh who had been with them) was killed. This must mean Egypt stopped being a major player in the world as they collapsed into third world status, right? Except they didn’t. The Exodus was to have occurred around 1500-1450 BCE, which corresponds with the rise of the New Kingdom, which was the height of Egyptian power and influence until nearly 1000 BCE. If god had destroyed Egypt, no one bothered to tell the Egyptians.

The Song of Moses and Miriam

Chapter 15 begins with the song of Moses and Miriam. The COI sing this song in praise of the Lord, on account of how great he is at killing people. Seriously. Here’s a couple of lines from the song.

The people shall hear, and be afraid: sorrow shall take hold on the inhabitants of Palestina.

They are bragging about how their god kills everyone, and how the people who are living quietly in Palestine will be in fear and sorrow as soon as they get to the promised land.

They travel on further, to a place with “bitter” water, and god tells them to throw a tree in the water and it will be fine. (Exodus 15:25) Then he starts with the laws.

And said, If thou wilt diligently hearken to the voice of the Lord thy God, and wilt do that which is right in his sight, and wilt give ear to his commandments, and keep all his statutes, I will put none of these diseases upon thee, which I have brought upon the Egyptians: for I am the Lord that healeth thee.

Here god tells his chosen people to do exactly what he says, or he will bring horrific tragedy to them. This is a classic abusive relationship right here. The chapter ends with them traveling to Elim, which is awesome, since it has twelve wells and seventy palm trees. Remember at the beginning of this story when we mentioned that the estimate of total population was about five million? That means each well is supporting 416,000 or so people, and there’s a tree for every 72,000 people.

And they came to Elim, where were twelve wells of water, and threescore and ten palm trees: and they encamped there by the waters.

To be fair, the number twelve is the “complete” number; it is the number of the zodiac, there are twelve new moons in a year, twelve tribes of Israel, etc. Seven is also “perfect,” as it is the divine number. God rested on the seventh day, there are seven hills of Rome, Buddhism has seven higher planes and seven underworlds, there are seven heavens in Islam, the Book of Revelations is littered with the number seven, etc. It seems this was a very symbolic way of ending the chapter and the part of the Exodus involving Egypt.

Up next, we have mindless wandering, crazy rules, and a vengeful god!